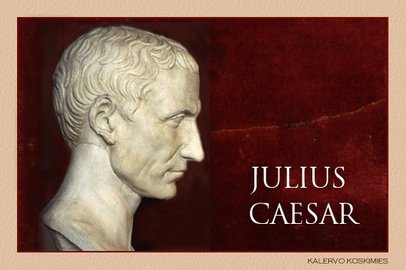 Venus, the Goddess from whom the Julian family claimed descent

MANY HISTORIANS ACCEPT without question the blatant propaganda fostered by the rump of the oligarchy defeated by Julius Caesar that the fall of the Republic of Rome was a tragedy for civilisation and that its principal engineer, Gaius (or more strictly Caius) Julius Caesar himself, was therefore an arch criminal whose motives were pure jealousy and vaulting ambition.

In fact nothing could be further from the truth. Julius Caesar was not just a great general with the ambition to rule the growing Roman Empire with an iron fist. He was one of the greatest thinkers and aesthetes of his day. He was a man with a vision of Rome at the centre of an empire of equal nations, governed by men of principle and talent from wherever in the Roman world and from whatever class they might originate.

The Rome in which he grew to maturity was a cesspit of corruption and mafia-style violence. It was governed by an obscenely rich and self-seeking oligarchy, which is why he set out to obtain for himself the military power base that was his passport to political change – the only form of power that the oligarchs really feared.

Caesar himself was no angel. He had faults that cannot be denied:

•A personal vanity evidenced by his trademark comb-over;

•A love of wealth and the power it gave him to influence outcomes – though not the ostentation so beloved by most of his patrician contemporaries;

•A love of women by whom he was greatly influenced, from:

This series tells the story of how Caesar built a power base in order to change Rome from a city state tyranny into the hub of a fast-growing empire . Instead of the cynical, propaganda-tainted tale promulgated through history, this five-part series presents a very personal interpretation of the great general's Commentaries on the Gallic Wars, in an attempt to counter some of his ‘bad press’.

Had Julius Caesar been able to foretell what his adopted son would create after a bloody civil war,  he would, without question, have settled his legacy elsewhere.